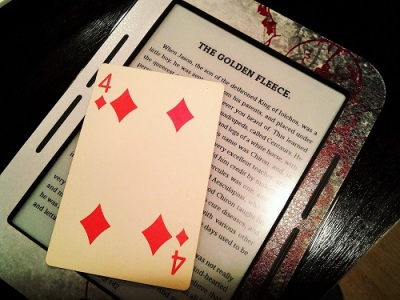 And my first story for the Deal Me In challenge comes from Tanglewood Tales.  How appropriate!

“The Golden Fleece” is the last story in Tanglewood Tales, a sequel to A Wonder-Book for Girls and Boys.  Through the frame plot of a young student, Eustace Bright, retelling Greek myths to his little cousins, Nathaniel Hawthorne takes us through the highlights of these sanguinary dramas in a quaint, cosy, and child-friendly format.  “The Golden Fleece” recounts the epic quest of Jason and the Argonauts, as they embark in a fifty-oar ship to find the mythical ram’s fleece and reclaim the kingdom that was stolen from Jason’s father.

I enjoyed this story quite a bit.  It was entertaining and often funny, a nice balance to the darkness of Gatsby to start off this year’s reading.  The abrupt ending – and a few loose threads – were the main things I wished had been tidied up.  However, those are more or less due to the myths themselves and not Hawthorne’s rendition, necessarily.  4.5 stars.

A side note – many critics would take issue with his bowdlerization of the original plots.  It doesn’t bother me, especially since he approaches it almost like a spin-off rather than censorship.  Growing up, I read another small collection (for children) of the Greek myths, and it was perhaps slightly less “adapted,” but also more dreary.  The point is, I do think this is a good adaptation to give kids the gist of the myths.  This, and Wishbone (oops – dating myself here!).