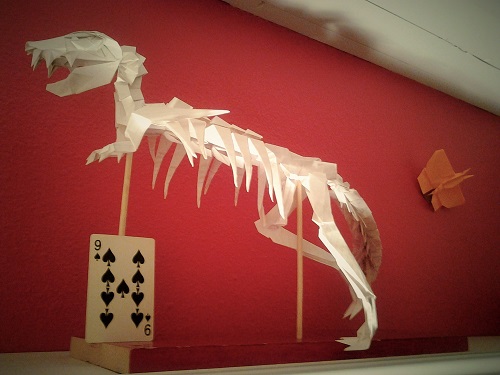 In this second round of the Deal Me In challenge, I was excited to read a classic by Ray Bradbury, whose works are new to me.  “A Sound of Thunder” is one of his best-known science fictions, and it’s about a man named Eckels who signs up to go back in time on a safari – hunting dinosaurs, that is.

I guess I will always compare these kinds of plots to The Lost World by Conan Doyle, a big favorite of mine.  My overall feeling about “A Sound of Thunder” was that, in scope, it was trying too hard.  It covered the two big topics, prehistoric life and time travel, but there wasn’t a lot of development, and the reader was asked to take a lot at face value.  For example, (spoiler in white):  Eckels’s behavior seemed perfectly natural to me, and it’s hard to imagine him being the first offender.  There were some good descriptions throughout, but also gratuitous cussing that felt like filler.

1.5 stars.  Decent read for waiting at the doctor’s office, not worth it if you have more time.