In honor of the day before Singles Awareness Day Valentine’s Day, here’s my favorite romantic relationships from literature (in no particular order): 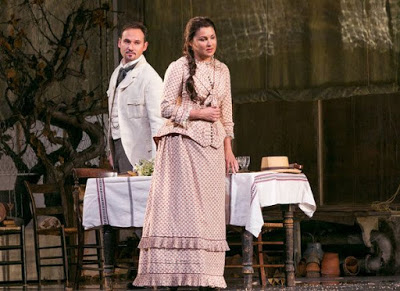 Tatyana and Eugene from Eugene Onegin

Tatyana is a bookish country girl who writes a love letter to Eugene, a worldly and cynical city boy.  Everything falls apart from there…  The complex story and character building make it my very favorite romantic novel, and I absolutely love the Met Opera’s 2014 production (due soon for a rewatch).

Arthur and Amy from Little Dorrit
Little Dorrit is like a Cinderella story where the prince is also in trouble.  In the 2008 miniseries, Matthew Macfadyen and Claire Foy brought these two characters to life, and I still can’t watch this without major feels for them. 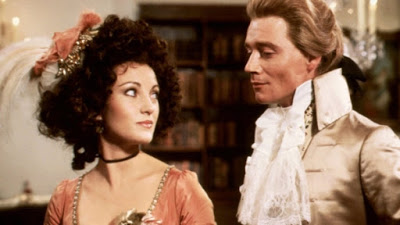 Percy and Marguerite from The Scarlet Pimpernel
Breakups and adulteries tend to take center stage in literature, so I especially love a good story about a saved marriage.  A bit of swashbuckling doesn’t hurt, either.

Natasha and Myshkin from The Idiot
In the eyes of elite society, Natasha is “damaged goods” because of sexual abuse she suffered as a child.  Myshkin understands her and vows to always love and respect her.  It’s my favorite proposal scene of all time. 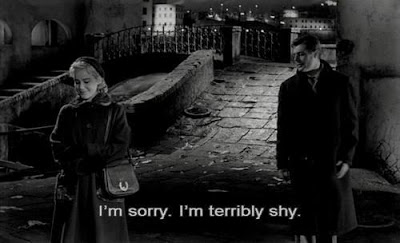 Nastenka and the Narrator from White Nights
The ultimate story of unrequited love between two strangers.  It’s the stuff of Hollywood…but somehow, Dostoyevsky makes it work.

May your sky always be clear, may your dear smile always be bright and happy, and may you be for ever blessed for that moment of bliss and happiness which you gave to another lonely and grateful heart. Isn’t such a moment sufficient for the whole of one’s life?

Mina and Jonathan from Dracula
Two intelligent characters who stay true to each other through the worst of experiences.  Literature needs more couples like them!

Phileas and Aouda from Around the World in Eighty Days
Verne isn’t known for romance, but I always liked these two.

Well, friends, not being too romantic myself, I did my best and could only come up with seven.  Any favorites from this list (or ones I missed)? 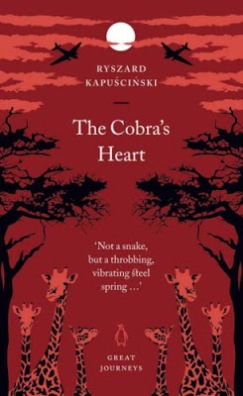 The Cobra’s Heart is a succinct yet expansive book about a Polish journalist’s experiences and observations in 20th-century Africa.  Just under 100 pages, it’s merely an excerpt of Ryszard Kapuściński’s full-length book, The Shadow of the Sun.  Upon finishing it, I was happy to find the full version already on my to-read list (added, though forgotten apparently, in 2013) as well as pleasantly surprised that this miniature made me want to read the full book.

Though the titular chapter – in which the author has a close call with a deadly cobra – is interesting enough, it’s the historical-political anecdotes that I found the most intriguing.  In “I, a White Man,” he talks about the feeling of apartheid in Dar es Salaam, a coastal city in Tanzania which encompasses neighborhoods from the comfortable, predominantly white Oyster Bay to the dry, dusty African suburbs away from the water.  He explains how, upon the eventual departure of the Europeans, a new elite class emerged which continued to exploit the common people and led to events such as the 1966 military coup d’etat in Nigeria. In “Amin,” Kapuściński paints a portrait of Idi Amin, the notoriously brutal dictator of Uganda in the 70s.

The fishermen threw their catch onto a table, and when the onlookers saw it, they grew still and silent. The fish was fat, enormous . . . Everyone knew that for a long time now Amin’s henchmen had been dumping the bodies of their victims in the lake, and that crocodiles and meat-eating fish must have been feasting on them. The crowd remained quiet.

Kapuściński has a great writing style, descriptive but not too wordy or overly “clever.” Some reviewers have described his full-length book as too bleak or negative.  I can’t speak to that (yet), but I think these excerpts show someone with real interest in the subject and empathy with the people he is describing.

It’s snowing heartily again, on top of the 2-4 inches from earlier this week that didn’t fully melt.  So I came home early and am looking forward to a weekend “snowed in” – which means reading!

The Gospel of John
I’ve been rereading the Gospels in this order: Mark, Matthew, Luke, and now John.  Though I don’t know it’s right to have a “favorite” Gospel, what I will say is I particularly connect with John’s because of his incredible writing style and some of the details he includes, like the story of Nicodemus.

I’m reading a few other books as well, but I’m holding back a little, partly in anticipation of an upcoming Moby-Dick readalong.  (Not exactly sure when it’s starting, but I don’t want to be in the middle of two chunksters at once.)

That said…  I recently found these cute little books at the thrift store and had to take them home. I’ll probably read one or two this weekend. 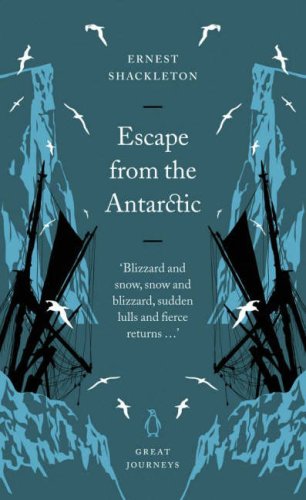 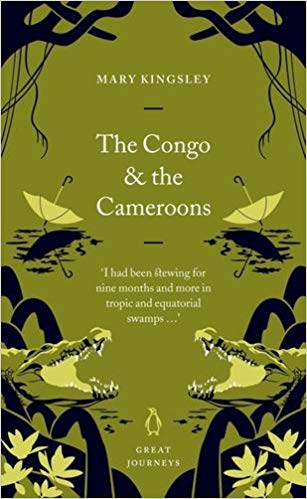 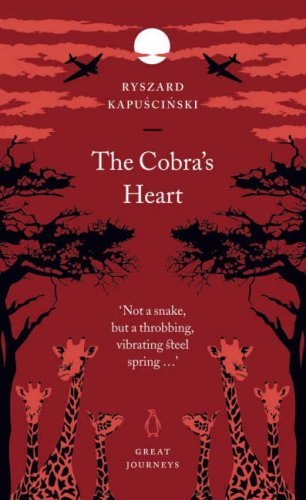 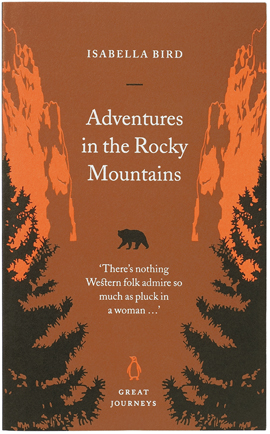 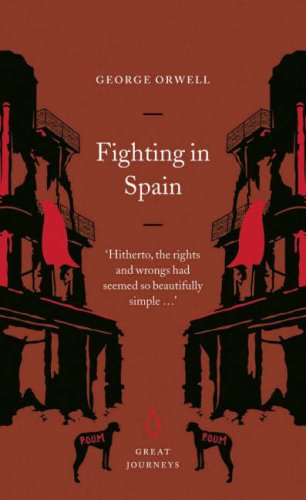 By “little,” I mean pocket-sized.  They’re really excerpts of longer works, part of a Penguin series called Great Journeys.  I’m not usually a fan of excerpts (give me unabridged!) but the cover art drew me in. Plus I’m not necessarily planning to read the full version of all of these (except Shackleton, which I already have). 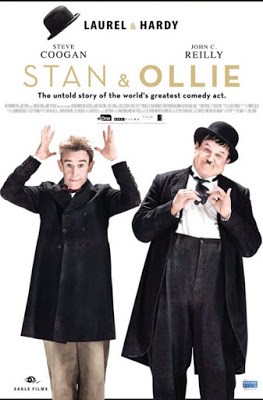 My family and I went to see Stan & Ollie a couple of weeks ago, at a small theater which specializes in indie and foreign films.  We’re big fans of the original Laurel & Hardy, and we all enjoyed this biopic, even if it was very sad.  I didn’t feel there was enough in the movie for me to give a full review, but you can read more about it (and the real-life figures) here.

Downton Abbey
My family is on a Downton Abbey rewatch, and, in spite of my best efforts to resist, I’ve joined them for an episode or two… or three… or four…

I’ve always had extremely mixed feelings about this series.  (When one’s favorite character is the cynical, sometime villain, Thomas Barrow, one is bound to have mixed feelings.) I can’t deny the plot and characters are very entertaining – and who doesn’t enjoy a jaunt through the 1920s?

Still on an indie folk kick.  I always enjoy this one, “Birds” by East Love, and I can relate very strongly to it at the moment.

For many of us the scientific-technological revolution arrived at precisely the right time, with the world of science as a kind of castle where you could protect yourself from the shifting winds of official ideology. (p. xii)

This single sentence from Natan Sharansky’s memoir Fear No Evil really grabbed me.  Here is someone I could immediately relate to in a unique way.  I’m not brilliant at chess, math, or computer science like Sharanksy, but I understand him.  In a world where politics and ideology are constantly in our face, some of us cling to science and technology – constants of logic and scientific process – as a way to feel safe and find commonality.

But what happens when not even science can protect you?

This break-down of “the castle” is what happened to Sharansky.  He talks about how he came to explore and embrace his Jewish heritage, in part through his friendship and eventual engagement with a Jewish activist, Avital.  During the 1970s when this all occurred, the USSR was preventing many Jews from emigrating to Israel, so those who were denied visas became known as refuseniks.  Sharanksy, a refusenik himself, began to campaign for refuseniks’ rights, becoming almost a minor celebrity through his interactions with the Western press.

Barely a day married to Natan, Avital was finally allowed to leave Russia and compelled to leave immediately before it was too late.  Natan, however, was still denied his own visa and continued to be followed by his “tails” who were assigned to watch him.  Three years later in 1977, he was arrested, accused of being a spy for the U.S.

The rest of the memoir follows his intense and truly stunning determination to survive his prison sentence and demand justice.  Logically minded, Sharansky immediately came up with a mind map, outlining his method of dealing with the authorities and maintaining his dignity.  A major piece of this was his decision to have no association with the KGB – no bargaining, no deals – even when tempted or tortured.

As I read this, I was having flashbacks to Kafka’s The Trial.  Since Sharanksy was well known outside of Russia, he was treated somewhat better (relatively speaking) than more obscure prisoners.  Nonetheless, the authorities intended to destroy his integrity, chiefly by means of monologues and monotony, trying to manipulate him by withholding visits with his worried mother.  They really took several pages out of Kafka, and the sheer, maddening tedium of it all would be enough to drive most people into cooperation.

Sharansky, however, managed to not only not cooperate but to come out ahead.  He took advantage of his position as a well-known activist to call out the authorities when they were not following their own rules.  He used his empathy to network with other zeks (prisoners) and try to stay on good terms with his fellow inmates.  He used hunger strikes strategically and stuck to them.  Finally, he focused on his spiritual life, through his Psalm book, his pictures of family members, and his prayers.

One small part of the book that also stood out to me was the role of literature.  Sharansky credits Sherlock Holmes as being a major influence in his pursuit of logic, which was to help him in his trial.  He also relates a moving scene in which he and two others, locked in punishment cells (solitary confinement with low rations), passed the time by debating about authors and their books.

Thanks to Stephen for sharing his review of the book (which is how I found out about it!).

So…contrary to my past practices, I am starting to embrace epic challenges.  Before this enthusiasm leaves me, I’ve decided to finally join The Classics Club and commit to reading 50 classics within five years. 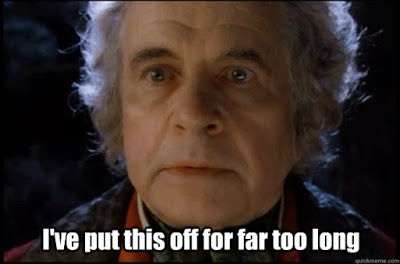 It’s a pretty reasonable goal (ten classics a year), since I mostly read classics anyway.  But I’m making it more difficult by including some chunksters and books I’ve been putting off for years and some that fall under both (*cough* War and Peace).  I also threw in some rereads that I keep meaning to return to.  The list also came out to 52 instead of 50 (sigh), but I’m only committing to 50.

On the blog: Chinese Poems, an essay by Wendell Berry, and thoughts on @andrewyang2020 . (Trust me, they're all loosely related. 😆) Link in the bio!
Trying something new on the vlog - link in the bio! . . . #art #surrealistart #vloggersofinstagram #francoisdenome #françoisdenomé
Happy Lunar New Year! 🧧 Somewhat coincidentally, I've been reading Chinese Poems translated by Arthur Waley. There are some beautiful ones, though many are very sad...
So "skip the line" is now a thing? Not sure whether to feel lucky or villainous 🤦 #overdrive #loserthink #scottadams #dilbert
Having finished A History of East Asia (link in the bio!), I thought I'd circle back to this biography of the one-and-only Nikola Tesla. Apart from the technical aspects - which inspired my break to begin with - this is still a highly readable biog. As an amateur graphic designer, I also absolutely love the cover design and inner layout, with its use of original diagrams and photos from Tesla's day (or close to it). 🤓
Some quotes haunt you long afterwards...this is mine. What's yours?