A Vindication of the Rights of Woman – Week #4 / Wrap-Up 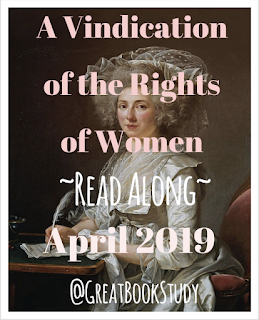 If you know me from past years, you know I’m terrible at sticking to read-alongs and challenges.  So I have to pat myself on the back for finishing this one.  🙂

Overall?  I give the Read-Along 5 stars – the pacing and discussion questions have been excellent.  The book itself, I give a solid 3 stars.  Wollstonecraft packed a lot of thoughts into the book, and I agreed with her on many points.  At the same time, there was a lot of needless repetition, which, if I hadn’t been on a schedule, might have bogged me down completely.

On to the discussion questions:

Do you agree or disagree with Wollstonecraft’s arguments about “stupid” romance novels, in which an author presents perfect images of men and women in love and marriage. (We could even apply this to romantic films.)

I couldn’t tell exactly what kind of novels she dislikes, though it seems to be all of them??

Anyways, I would agree that romantic novels/films can be dangerous if they’re your main diet of entertainment.  By “romantic” I mean even as innocuous as Jane Austen or Lucy Maud Montgomery (let’s not even talk about Twilight).  I think a healthy mix of genres is always going to be better than, say, a narrow focus on romance, or action, or detective stories.  (Disclaimer: Former “hopeless romantic,” now barely romantic…I’m a bit jaded, perhaps.)

What do you think of her suggestion that a benefit of mixed schools would encourage early marriage? That is not the case today. If anything, less people are marrying, or more people are putting off marriage. So what happened (since modern schools have been co-educating for generations)?

Yeah… I think what she described was nice, but completely utopian.

Many parents don’t want their kids getting into serious romance in high school.  They want them to finish college first, since high school degrees alone no longer hold the kind of weight they used to.  So there’s going to be opposition to early marriage on that front.

Also, like you say, Ruth, moral standards have completely changed since Wollstonecraft’s time.  Now marriage is viewed as optional.

Finally, while it is completely possible to fall in love in high school, I do think in some cases, “familiarity breeds contempt.”  I can see more appeal in getting out into the world and meeting different kinds of people.

Are there any arguments throughout the book that you definitely disagree? How would you respond?

I would have liked to know more about her complaints on cathedral services in England.  Though I’m not Catholic, in general I didn’t care for her comments on church ritual, but there wasn’t enough context for me to give an answer to it, e.g. I couldn’t quite tell if she was talking about liturgy in general, some specific rituals, and/or the way they’re carried out.

Also, I am curious what she is talking about in these quotes:

Considering the attributes of God, I believe, that whatever punishment may follow, will tend, like the anguish of disease, to show the malignity of vice, for the purpose of reformation. Positive punishment appears so contrary to the nature of God, discoverable in all his works, and in our own reason, that I could sooner believe that the Deity paid no attention to the conduct of men, than that he punished without the benevolent design of reforming.

To suppose only, that an all-wise and powerful Being, as good as he is great, should create a being, foreseeing, that after fifty or sixty years of feverish existence, it would be plunged into never ending woe—is blasphemy.

God gives us this time on earth to reform… I don’t know of any biblical reference which suggests there is reformation in the afterlife.

Did the author change your way of thinking on any issue?

Not exactly.  But like I mentioned before, I feel I have a deeper understanding of the context around Jane Austen’s novels, as well as a desire to re-read them all.  This is not a small thing… only a few months ago, I would’ve been like “no way”!

I’m also reminded of all the benefits I have as a woman in 21st-century America: college education, privilege to vote, a car, the opportunity to be a leader, etc.  I may be pessimistic about the current state of society and the future, but on a personal level, I feel a sense of satisfaction having experienced a level of equality Wollstonecraft could only imagine.

Are there still areas of improvement?  Absolutely.  I have had some negative experiences as a female, from childhood to my college years.  Unfortunately, there are some people who still view a woman as “less than” or someone to be taken advantage of.

I retain my opinion that feminism, as it is today, is problematic.  Interestingly, it seems like the movement was also political in Wollstonecraft’s day, hence her analogies with revolutionary thought.  But today it is political in the extreme, and some of its proponents try to vilify anyone who disagrees with their particular form of feminism and social policies.

That’s why I’m glad to read these books and have these discussions, with women and men alike.  I don’t believe books like Vindication are the special property of one particular group, and we get a more nuanced picture if we evaluate literature and history for ourselves, rather than through someone else’s interpretation.