Recently I saw these two classic films for the first time: Vertigo (1958) and How to Steal a Million (1966).  On the surface, they have really nothing in common, so I thought it would be a fun challenge to compare and contrast them. Vertigo is an Alfred Hitchcock film, considered by many reviewers to be his masterpiece.  James Stewart plays a retired detective, Scottie Ferguson, who is commissioned by his friend to follow said friend’s wife Madeleine (Kim Novak) around San Francisco, to determine if she’s become possessed with the spirit of her great-grandmother.  Matters become weirder when Scottie finds himself falling head over heels for the chilling but attractive Madeleine, who also seems to have a thing for him.  Scottie, unfortunately, suffers from vertigo and a fear of heights, which threaten to jeopardize his task and Madeleine’s life.

Let me just say I have mixed feelings about Hitchcock films.  This is how I’d rank the ones I’ve seen so far (best to worst):

As you can see, the popular ones I don’t care for very much.
Vertigo actually started out very promising, but somewhere around the halfway mark, it got very slow and tedious.  The plot is predictable and, at times, unduly macabre.  As usual with Hitchcock, I did find the cinematography to be stunning – with shots of the Golden Gate Bridge and San Francisco as they looked in the 50s – but it wasn’t enough to carry the film through.  There’s only so much disbelief you can suspend, with an unlikely romance and one or two gaping plot holes.

How to Steal a Million

Peter O’Toole and Audrey Hepburn?  That was all I needed to know.

How to Steal a Million follows an art forger and his loyal daughter Nicole (Audrey Hepburn) who will do what it takes to keep her scoundrelly dad out of jail.  That includes staging a faux burglary to prevent a particular sculpture from being tested for authenticity. Enter Simon Dermott (Peter O’Toole), who claims to be an expert burglar.  With great reluctance, he agrees to take on Nicole’s challenge and break into a high-security museum to “steal” her father’s own statue and save the family honor.
This was the dumbest, cutest, cringiest movie I’ve seen in a long time. (I guess that’s what rom-coms are?  I don’t usually watch that genre.)  O’Toole manages to make a creepy role extremely charming, and Hepburn’s cute innocence outshines even her chic wardrobe (designed by Givenchy and made rather a big deal of).  I’m pretty sure nobody except these two could play such lovable dorks. 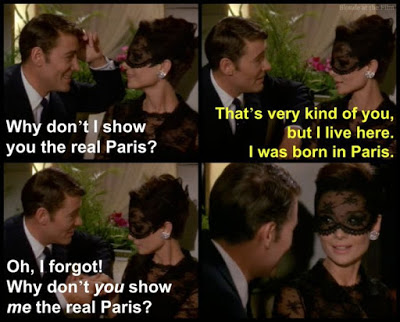 As it is, what starts out as a cute comedy turns into a long-winded, tedious ordeal, during the greater part of which the two are trapped in a broom closet and exchanging risque jokes.  Again, rom-coms aren’t exactly my thing, so I was disappointed when the plot kind of fizzled out in the second half.

Here’s my takeaways from these two films:
Thoughts…recommendations?  I’d be curious to hear if any of you like Vertigo.  It’s the kind of film where I at least understand its popularity.  I just didn’t care for it personally.  How to Steal a Million is pure fluff and I’ll probably watch it again, to my great chagrin.

Only in the first half still, but so far, this book is like dystopian Alice in Wonderland, yet written in a gentle way that makes it more real than exaggerated. The use of memory (and memory loss) as a literary device is one I've been musing over for years and have tried to write about. It's increasingly relevant as we see the rise of "cancel culture" in the West. I have to say I'm an unabashed proponent of free speech, and rewriting the past seems to me not only dishonest but undermining the lessons we can learn from humankind's mistakes. #currentlyreading #overdrive #yokoogawa #thememorypolice #classicbooks #classicliterature #japaneseliterature #dystopianclassics #dystopianbooks #dystopia #1984 #cancelculture #mondaythoughts #bookworm #booknerd #booksofinstagram #booksbooksbooks #historyrepeatsitself
Let's hang out and chat about books! I'll be live on YouTube at 5 PST this evening, would love to see you there. Link in the bio! 📚📺 #classicbooks #bookvlogger #bookvlog #classicliterature #booknerd #booksbooksbooks #quarantinereads #covid_19 #covid #meetup #booktube #booktuber
YouTube makes its own memes. Also I really miss the library right now. 😔 #halfalive #halfaliveco #halfaliveband #halfalivememes @halfaliveco #joshtyler #quarantinememes #memes #musicmemes #nownotyet #stillfeel
New on the YouTube. This was very difficult to read and review, so there will be 3 parts coming out this week. #LinkInBio #shusakuendo #japaneseliterature #silencebook #catholicbooks #historicalfiction #catholicauthor #bookstagram #bookvlogger #booksofinstagram #classicbooks #classicliterature
Thoughts are starting to come together... #shusakuendo #silence
A bit over halfway...this book is more nuanced than I expected it to be. The protagonist Rodrigues, a troubled priest, makes my heart ache with both discouragement and empathy. It's going to be hard to review. #shusakuendo #silencebook #japaneseliterature #librarybooks #libraryloan #classicbooks #classicliterature #bookblogger #booksofinstagram #bookstagram #booknerd #quarantinereads