It is puzzling to me why Twice-Told Tales is passed over for The Scarlet Letter as required/recommended reading in U.S. schools.  I cannot yet compare the contents of the two, having avoided Scarlet Letter this far, but in the context of his other writings such as Blithedale or Seven Gables, Twice-Told Tales strikes me as quintessentially Hawthornesque writing in a more “fun-sized” format.

And Nathaniel Hawthorne, especially in Twice-Told, is more contemporary than he is usually perceived.  Born in Salem, MA, in 1804, he lived the first several years of his post-graduation life in a solitude worthy of a 20th-century existentialist.*  Hawthorne’s melancholy outlook, however, is intertwined with his own religious feeling, skepticism of society, the legacy of American history, and the two sides of death: the ugly and the beautiful.  Always in his writing runs this thread of contrast between the Jekyll and Hyde characteristics of the world, in which Hawthorne hesitates to take anything at face value.

A frequent motif of both Scarlet Letter and Twice-Told Tales is that of religious hypocrisy.  Hawthorne comments on this through stories of Puritans vs. non-Puritans, such as “The Minister’s Black Veil,” “The Gentle Boy,” and “The May-Pole of Merry Mount.”  His impassioned regret (stemming emotionally, perhaps, from his relation to a Salem witch trial judge†) suggests he views this as the most damaging rift between human beings, more than isolation or even death.

Death, indeed, goes so far as to bring comfort to characters in “The Wedding-Knell” and “Old Esther Dudley.”  It plays a more ambiguous role in “The Hollow of the Three Hills,” in which grief drives a woman to witchcraft in search of knowledge, leaving her in return no reassuring closure. As one of the Dark Romantic authors, Hawthorne’s romanticism of death is inevitable, yet fully cognizant of its meaning and not altogether untinged with realism. 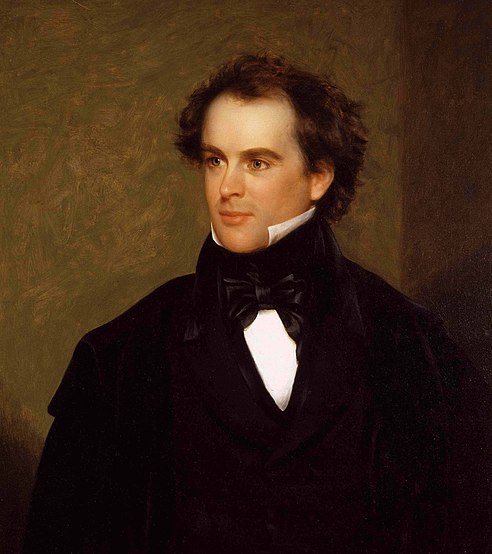 A third major theme of Twice-Told is Hawthorne’s New England identity.  From “The Great Carbuncle: A Mystery of the White Mountains” to “Foot-prints on the Sea-shore,” the natural beauty of New England is a character in its own right.  You stand in the sunny rain of a summer shower, and wander among the sunny trees of an autumnal wood, and look upward at the brightest of all rainbows, over-arching the unbroken sheet of snow, on the American side of the Niagara (“The Haunted Mind”).

A few of my favorites which I have not mentioned yet are “Sunday at Home,” “Sights from a Steeple,” “The Prophetic Pictures,” and “The Ambitious Guest.”  The first two are something like creative nonfiction, really allowing the reader to understand Hawthorne’s perspective and feelings of isolation.  The third is a chilling story reminiscent of Poe.  In the fourth, Hawthorne sketches the ties that can connect total strangers when they are united by their common tragedy.