Some books, when you come to the end of them, leave you gaping inwardly.  Dejected and confused, you feel like you missed something critical, after “getting” everything that came before.   Seven Pillars of Wisdom ends just like Lawrence of Arabia, so I should have seen it coming. But after some whirlwind chapters, the ending came suddenly, doubly sobering as a first-person narrative.  Like so many real-life struggles, it hangs loosely together instead of being tied up neatly; you look for closure and find questions instead.

Men prayed me that I set our work, the inviolate house,
as a memory of you.
But for fit monument I shattered it, unfinished: and now
The little things creep out to patch themselves hovels
in the marred shadow
Of your gift.

9 & 10 – Balancing for a Last Effort; The House is Perfected

Exasperated one night at G.H.Q., I had blurted out that to me 1918 seemed the last chance, and we could take Damascus, anyhow, whatever happened at Deraa or Ramleh; since it was better to have taken it and lost it, than never to have taken it at all.

Feisal…replied that he would try this autumn for Damascus though the heavens fell, and, if the British were not able to carry their share of the attack, he would save his own people by making separate peace with Turkey. (p. 571)

I begged him [Feisal] to trust not in our promises, like his father, but in his own strong performance. (p. 572)

It became a legitimate cause for care that the Arab Revolt continue to collaborate with Britain even till the last minute.  Lawrence sensed that they would fare badly – perhaps fatally – if they made motions counter to the Sykes-Picot agreement, which would split Ottoman Turkey between the European powers of England, France, and Russia.  He warned Feisal in advance of this treaty, and Feisal, hardly blind to the political deception of his “allies,” listened to Lawrence’s advice and went along with the British plan, which as the lesser of two evils would at least prevent his displacement altogether.  But, knowing as he did that his possession of the conquered territories was up in the air, Feisal listened to their promises with more than a grain of salt.

I think it is tempting, especially in the film, to view Feisal as the “king” of the Arab people, a monarch on the scale of George V or Nicholas II.  However, though he and his family were the symbolic power figures of the Revolt, it’s worth remembering that throughout the effort, there was plenty of conflict between the different tribes that he and Lawrence attempted to unite, and unity in war may not have been unity in peace.  It goes back to that telling quote – “fighting to get rid of Empire, not to win it” (p. 100)  Perhaps his flexibility was a kind of realism, and he may have made certain choices based on survival, rather than ideals.

At this late point, I had supposed the most gruesome scene from the movie – “No prisoners” – to be mostly a Hollywood fabrication, but I was wrong.  It makes sense that it happened near the end of his career in Arabia, when Lawrence was struggling both mentally and physically through his self-proclaimed fraud that he so hated.  He, Auda, and his men come across the remains of a village that had a personal connection to a member of their group.  They find a child bleeding to death, women sadistically raped and killed, and the bodies of dead babies on the ground.  It is not hard to imagine that this hellish sight must have provoked the hellish response from Lawrence and his men, in their revenge on the retreating enemy.  “By my order we took no prisoners, for the only time in our war…we killed and killed, even blowing in the heads of the fallen and of the animals; as though their death and running blood could slake our agony” (p. 654).

There is nothing glorious in war.  This has to be one of the major themes of Seven Pillars – mankind’s most decorous and elaborate and stupendous undertakings are not unwed with devastation, even when you are on the “good” side.

Lawrence writes of the taking of Damascus matter-of-factly: British and Arabs are welcomed joyfully by the citizens, and, as shown in the film, there are numerous hiccups to the establishment of government, some humorous and some not.  Yet in the midst of the victory, photographs, and commendations, there is irony and sadness in the final words of his narrative.  The Syrian Government is established, albeit on shaky foundations, with Feisal and General Allenby jointly managing the city.  Lawrence’s “soldiering” was no longer needed.

It is worth pointing out that Lawrence had a great and sincere respect for Allenby, summing him up as “dreamlike confidence and decision and kindness” (p. 682).  There is no suggestion that there was any bad feeling between Lawrence, Feisal, and Allenby, as portrayed in the movie.  I think the purpose of that cinematic twist was to express how Lawrence felt, in the hands of British and French politicians, but it does a large discredit to Lawrence’s actual feelings about these two people at that time. 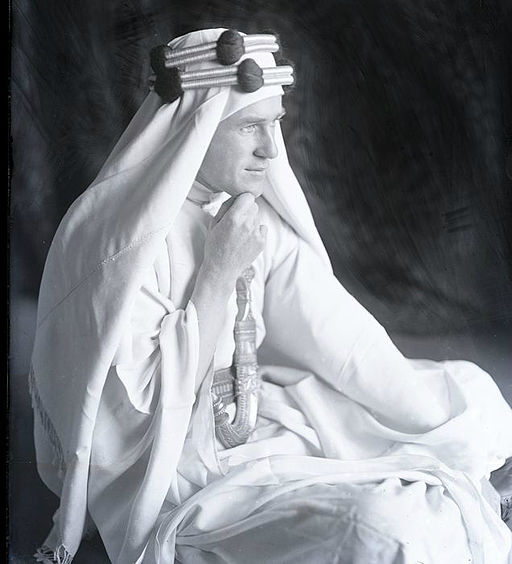 Finally – for the third and last time, Lawrence asks to be let go.  For the first time, he is told yes, and feels instant pangs of regret.

Lawrence returned to England, where he wrote and published Seven Pillars of Wisdom.  Ultimately he returned to military service, this time as a humble aircraftman, “John Hume Ross,” in the Royal Air Force.  Feisal‘s power in Syria was challenged by the French, and his subsequent Kingdom of Iraq was one of mixed successes and even infamy, before his early death.  They were both only in their mid-to-late 40s when they died.

World War I history always leaves me with the question – why?  Here, in this book, is another echo to that why.  I cringe to hear the words “war” or “revolution” used flippantly, as they sometimes are by our politicians.  On paper or in speeches, the concept can sound good, desirable, or necessary, but if ever it is, hopefully we have measured its worth by the testimony of those who have fought wars, and through their tortured words tell us the human cost of war, in lives of “ordinary” men, women, and children.