Returning to The Wonderful Wizard of Oz

Currently: at home, listening to the rain, trying to fend off the beginnings of a cold.  (I haven’t been sick in quite some time…it was bound to happen.)

What better time to talk about The Wonderful Wizard of Oz? 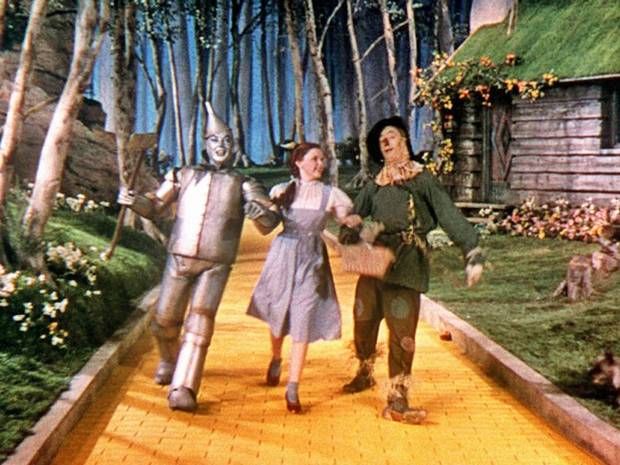 Most people are familiar with the film, having the somewhat abbreviated title of The Wizard of Oz.  It was one of my childhood favorites, perhaps more so even than Mary Poppins, and I still love it.  You’d have to be hardhearted not to at least sympathize with Dorothy’s plight and desire to find home, after a gigantic cyclone tears her family apart and literally drops her in a strange, fantastical land.  For my part, I’ve never stopped wanting a pair of ruby slippers (magical or otherwise).

L. Frank Baum’s 1900 book predates the film by some decades and the modern reader by over a century.  It takes us a little more imagination to picture even Kansas.  Baum’s sparse yet concise prose helps us in this:

When Dorothy stood in the doorway and looked around, she could see nothing but the great gray prairie on every side. Not a tree nor a house broke the broad sweep of flat country that reached to the edge of the sky in all directions. The sun had baked the plowed land into a gray mass, with little cracks running through it. Even the grass was not green, for the sun had burned the tops of the long blades until they were the same gray color to be seen everywhere. Once the house had been painted, but the sun blistered the paint and the rains washed it away, and now the house was as dull and gray as everything else.

In spite of this bleak picture, Baum’s Dorothy is by no means anxious to get away.  Like an ultimate act of rebellion, her cheerful, simple life playing with her dog Toto makes even the prairie tolerable to her.  When the cyclone takes them away, Dorothy is set on one thing alone, and that is to find her way back.

This is just one of many differences between the book and movie. Happily, I found myself enjoying the book, while still appreciating the changes that were made for the movie script.  The moral of “Be careful what you wish for” is always a good cinematic theme; at the same time, I admire the original Dorothy’s obstinate cheerfulness, strong conscience, and single-minded determination.

Among the supporting characters, I was also happy to see many of the endearing characteristics of the film versions were taken from the originals.  The Tin Man (or here, Tin Woodman) is really a sweetheart, the Wizard is innocuous (and a little silly), and the Scarecrow (always my favorite) takes care of Dorothy throughout their adventures.  The character that was most different was the Cowardly Lion; in Baum’s version, he is less goofy and more tragic, which I prefer.

I won’t spoil it by saying anything more about the plot, which also differs from the original in several places.  If you haven’t read this, I do recommend it – it’s a delightful, modern fairytale, written with a wise simplicity that is common to all good fairytales.

I collect quotes on courage, and I’m adding this one, from Oz:  “There is no living thing that is not afraid when it faces danger.  The True courage is in facing danger when you are afraid…”