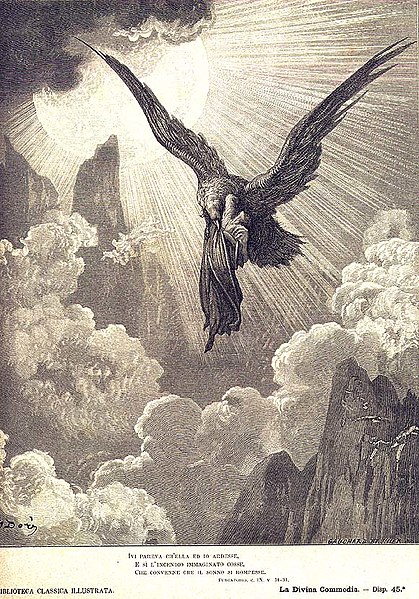 And of that second kingdom will I sing
Wherein the human spirit doth purge itself,
And to ascend to heaven becometh worthy

After enduring the nine circles of Hell, Dante and Virgil finally make it out of the underworld and back to the surface of the earth.  Under a starlit sky, they watch as a boat filled with souls and captained by an angel approaches the foot of Mount Purgatory.  Dante continues on his own journey as he follows Virgil up the nine levels of the mountain.  Together, in a similar vein to their experiences in Inferno, the two travelers observe the different disciplines which souls must endure before they have been “purified” of their remaining sins and made fit to enter Paradiso.

Some readers find the second two books of The Divine Comedy to be less interesting than the first.  I actually found Purgatorio to be much more compelling than Inferno, despite my expectations and the fact I don’t personally believe in the doctrine of purgatory. I think this must be for three reasons:

As before, Dante meets a number of real-life individuals on the mountain, while commenting upon contemporary issues in Italy.  He himself goes through purification of the seven “Ps” (peccatum = sin) as he moves from level to level.  Finally, leaving Purgatorio behind, he comes out again into the open air and finds the woman he loves – Beatrice – in a beautiful forest.

After Purgatorio, which was almost enthralling, Paradiso was a great disappointment.

Virgil, one of the condemned spirits, had to leave Dante at the end of Purgatorio, as I somewhat anticipated.  Now with his beloved Beatrice as his guide, the young poet completes his journey by ascending the nine levels of Heaven.  Along the way, he meets Biblical and Christian figures such as Solomon, St. Peter, St. Thomas Aquinas, and the Venerable Bede.  The higher he climbs, the more intense become the light and worship, culminating in the dazzling pinnacle of Paradiso, where God is exalted above all.

I’m afraid Dante’s imagining of Heaven is, well, boring.  Unlike the other two places of existence, there is little scenic variety here, and the illustrator, Doré, seems to have been of the same impression – there are far fewer illustrations in this book than in the other two.  Also, Dante makes what I think is a huge writer’s mistake in inserting his real-life love interest as one of the main characters, then proceeding to portray himself as staring at her adoringly through much of the story, while she grows more and more beautiful.  It’s hard to take it seriously.

This may be philistine of me, but I honestly think The Divine Comedy is somewhat overrated.  As a work of the early 14th century, it is indisputably impressive, and I sympathize with the author to the extent that he wrote this while banished from his homeland.  But with the insertion of personal life, the commentary on Italian affairs and figures, as well as some questionable theology, there was much I could not relate to.  For me personally, The Pilgrim’s Progress is a stronger allegory of faith, not to mention more enjoyable.