One day, Mary Poppins (Emily Blunt) shows up at the door of Michael Banks, who is now grown up and a widower with three small children.  He still lives at 17 Cherry Tree Lane, London, and is scrambling to make his next house payment before the Fidelity Fiduciary Bank boots them out.  Mary Poppins steps in to take care of the kids, leading them on an unexpected adventure through magical lands, London streets, and even the Bank itself, as they endeavor to help their dad find a way to keep the house.

With a cast including stars like Lin-Manuel Miranda and Colin Firth, this film was highly advertised, highly anticipated, and (since release) highly acclaimed.  Personally – while I found the movie to be beautiful aesthetically, it was lacking in a number of key areas:

Dick Van Dyke has an all-too-small role in the film, near the end.  My favorite cameo, however, was an unexpected one – David Warner. 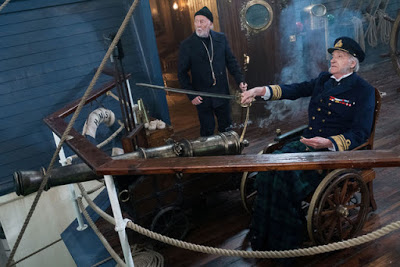 Some of us know him better as the sinister Captain Sawyer in Horatio Hornblower: Mutiny (2001).  Happily he’s not terrorizing poor midshipmen in this film, but rather playing a very charming Admiral Boom.

In summary: I recommend watching this on DVD if you’re curious, but I don’t feel it was worth going to the movies for.  And for comparison’s sake…I enjoyed Paddington 2 (2017) much more.