Echoes of Literature in "Julia Ross"

If it sounds too good to be true, it probably is.

The cautionary cliche, while well known, still remains almost limitless in its potential for the mystery and thrillers genres.  Perhaps this is why watching My Name is Julia Ross (1945) immediately calls to mind its literary precursors from the works of Arthur Conan Doyle and Daphne du Maurier.

The opening, in fact, takes a page out of Doyle’s “The Adventure of the Copper Beeches,” only this time set in the 1940s.  Londoner Julia Ross is a beautiful young woman, recently unemployed and completely alone in the world.  Her only friend and would-be boyfriend, Dennis Bruce, has just announced his marriage to someone else.  Depressed, and at a loss for how to pay the bills, Julia responds to an ad seeking a secretary for a wealthy Mrs. Hughes.  Mrs. Hughes makes Julia a generous offer, on the condition that Julia come to live with her at her mansion in Cornwall.  When Julia wakes up the next day, she realizes she’s been been drugged, taken prisoner, and given the name “Marian” in order to impersonate Mrs. Hughes’s missing daughter-in-law.

Unlike Doyle, the filmmakers lose no time in divulging Mrs. Hughes’s nefarious motives, so unlike “Copper Beeches,” the whole scheme is revealed in the first fifteen minutes of this 65-minute film.  It seems premature, but then as the plot pivots to escape-room – er, escape-estate – conflict, you can start to enjoy the tension as Julia tries to outsmart her captors.

Nothing could be more film noir than the Cornish coastal setting, one made famous earlier by Hitchcock’s Rebecca (1940).  Mrs. Hughes’s house could be a sister to du Maurier’s Manderley, and the sinister beach, roaring with the sound of breakers, makes you feel like you’re in a spin-off story set in the same foreboding environment.

Less effective are the characterizations.  To be fair, Julia Ross (played by Nina Foch) is a passable heroine for this type of story; in fact, she’s far more spunky than the nameless narrator of Rebecca.  On the other hand, it could be argued that Rebecca’s shyer, more nervous protagonist – especially as played by Joan Fontaine, in one of my very favorite performances – is better suited for the genre.  Julia is what I would call “selectively smart,” too dumb to see something fishy in Mrs. Hughes’s offer, but smart enough to try plan her own escape. 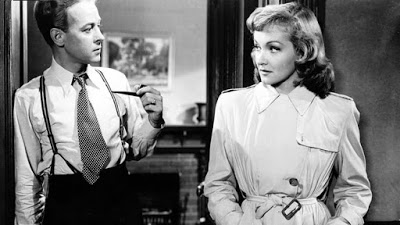 The other characters, unfortunately, are even worse.  The ex-husband of Marian, Ralph Hughes (played by George Macready) is supposed to come across as psychotic and rapey.  He would be terrifying if his lines weren’t so painfully hilarious and involving him randomly stabbing things with a pocket knife.  May Whitty is convincing as an apparently average Mrs. Hughes, but there is no backstory to suggest why she would shield and aid her awful son, apart from the fact that, well, they’re family.  This film would really have benefited from some tighter script-writing and/or an additional thirty minutes to fully build the characters.

One of my biggest pet peeves in a movie is when the screenwriters force a tidy ending when a succinct one would be more effective.  Spoilers in white: In this case, Julia’s future is resolved not by her making a smarter employment decision, but when the still-single Dennis Bruce, whom we’ve barely got a chance to meet, decides to pop the question.  Uh, what lesson is being learned here?  Even Doyle, back in those old Victorian days, was kinder to his heroine Violet Hunter, explicitly against Watson’s wishes!  The ending of this film was very much tacked-on and highly unsatisfactory.

Overall, I give the film 3.5 stars.  It’s not in the league of Rebecca, but if you enjoy thrillers of that style and era, then My Name is Julia Ross is a small investment of time for revisiting moody Cornwall.