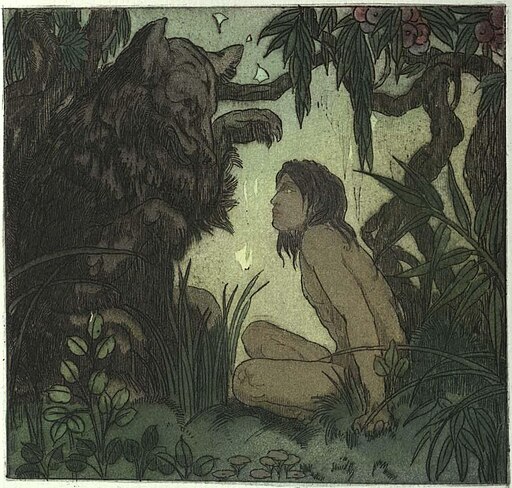 Like many famous characters, Mowgli makes his debut in a different time frame than we are accustomed to seeing him.  “In the Rukh” shows the feral child now grown to be a young man, having some of the same traits as young Mowgli – his distrust of settlements, for one – in addition to a self-confidence and refinement of skill which awe the locals to the point of superstition.  Gisborne, an English ranger, is fascinated by his new acquaintance and is intent on hiring Mowgli on to be his assistant in managing the forest.

It’s been so long since I read The Jungle Book proper, I wasn’t sure what to expect in this short story.  Overall, I found it interesting, yet underdeveloped.  It could be that, being so used to the character of Mowgli as a child, I struggled to accept him as a grown-up man, and what might have made a good sequel instead poses The Jungle Book as a superior prequel (a working hypothesis; I have started rereading it and am enjoying it more, so far).

The characterizations are not terribly strong.  There are some moments with Gisborne’s German boss and his Muslim servant which are supposed to be comedic, but these scenes have not aged well.  The conflict is fairly mild, and there really aren’t any “aha!” moments if you know the Mowgli story already.  Mowgli himself is, well, kind of boring.  Being grown-up and having fully developed survival skills, he’s lost the vulnerability which made his child self such a complex and interesting character.