Perhaps it says the most to admit that, even so soon, I wouldn’t mind watching this again.

Hollywood and great authors rarely go together.  If that great author is Franz Kafka, one of my favorites, then the very concept is shaky and a good execution defies all odds.  Interestingly enough, Kafka makes up its own concept and just goes for it.  Somehow even the pickiest of critics can find something to like about it.

But can we talk about Jeremy Irons for a minute?  Portraying Kafka, he strikingly resembles Jeremy Brett’s Sherlock Holmes, which is only a good thing.  More to the point, Irons is the glue that holds the show together.  The supporting cast is fine, the script is pretty good, yet he is the one who brings credibility to the setting.  His timidity and humorless perspective bring out the best parts of Gregor Samsa, Josef K., and the rest of Kafka’s book protagonists, and fortunately he has few of their faults.

We follow Kafka through a tangled plot which, despite its problems, I must applaud for its attempt.  It places the author himself in various Kafkaesque elements, such as the Castle, Gregor’s troubled relationship with his family, and the general unease from The Trial.  Then it combines them all under an umbrella plot of revolutionary terrorists plotting against a dictatorial government.

I would take issue with this, except that it makes a degree of sense, taking Kafka as a movie, which it is.  You have to give moviegoers a plot – beginning, middle, end.  Kafka manages to present Kafkaesque “monotony,” if you will, in a more palatable and familiar format, without really sacrificing anything important.  Some may disagree, but I don’t think this addition was altogether a negative.

The dialogue was the main disappointment.  There were times it didn’t feel genuine, or it glossed over things such as the development of the female character, Gabriela.  This was when the Hollywoodization was most apparent (as an aside, there are exceptions to every rule: Lincoln, for example, had very well-written dialogue.)  Probably not so noticeable if not compared to the books…but that’s what I’m here for.  🙂 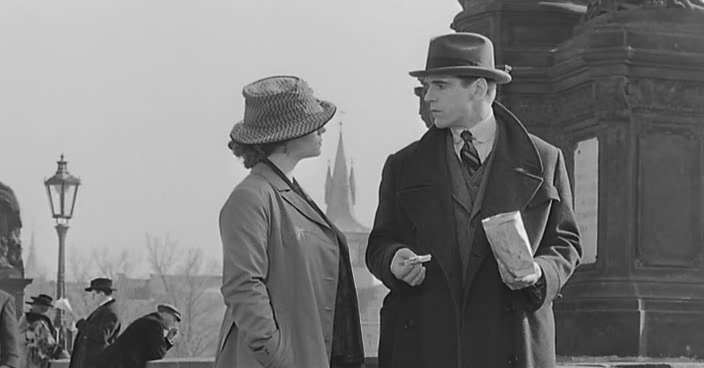 Production-wise, I enjoyed the soundtrack of Eastern European-inspired music and black-and-white cinematography.  That’s kind of an understatement – the visuals were stunning.  The scenes of the office, streets, and Castle were properly cluttered and claustrophobic and eerie.  The chase scene down the elevator was way creepy.  Is it strictly Kafkaesque?  No, but it is cinematically Kafkaesque.

I’m not sure that I would recommend this film to non-Kafka fans.  It really depends on what you like to watch.  As a fan, I thought it was worthwhile, and in a sense, much less “dark” than the books themselves.  Dramatization takes some of the mystery out of it.  What you lose in psychological subtlety you gain in entertainment value, and that trade-off, in this unusual adaptation, turns out mostly for the best.

Content:  Rated PG-13 for some frightening scenes and a nude image.  One of the villains goes into a restroom to look at photos of female models.  A maniacal assassin chases people at night; one character seen in the distance is stabbed; a man is tortured off-screen…unsure if anything is later shown.  Near the end a man is shown strapped down while his brain is being examined, a little graphic.  Overall, comparable to some Doctor Who episodes, without the lightheartedness.  On a positive note: no profanity or language that I recall.  (Also, it is easy to anticipate scenes to fast-forward, if you are a bit squeamish like me.)

Disclaimer: I don’t own the images in this post; they are used here only for illustrative/educational purposes (fair use).