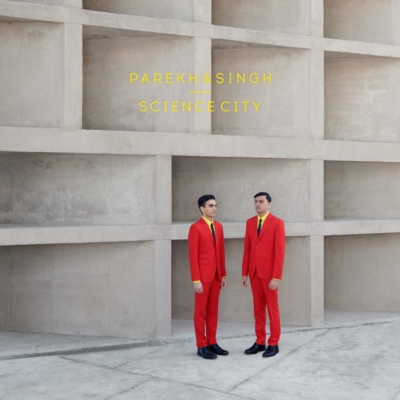 Just last month, Parekh & Singh finally released their second album.  I say “finally,” because I’ve been waiting for more music ever since I finished listening to Ocean (2016). I must have given up hope, because the new music sneaked up on me, and I kinda freaked out when I stumbled upon it a day or two after its release.  Would Science City live up to all my hopes?!

So, who are Nischay Parekh and Jivraj Singh?  I hadn’t heard of them or their genre – “dream pop” – until May 2017, when they released their music video for “Ghost.”  The retro vibe, bright colors, and Parekh’s introspective vocals immediately grabbed my attention.  I felt strangely nostalgic for something I didn’t even know existed.

Being already a huge fan of electronica artist Owl City, I love dreamy, poetic lyrics with a healthy dose of synthesizers, so this band was right up my alley.  Ocean was pretty much my playlist that summer (and fall, for that matter).

Incidentally, just like Owl City’s Cinematic (2018), Science City was initially disappointing but has gradually been growing on me.  I don’t necessarily see it as an album for introducing people to Parekh & Singh – that album is still Ocean.  Science City lacks some of the melodic brilliance and lyrical empathy which drew me to Ocean.  It’s more esoteric and therefore less approachable.  Still, to quote a violin teacher I once met, this music “takes a detour to your heart.”  It still gets there, it’s just a less direct route than Ocean‘s.

I was stoked for “Evening Sun” and “Surgeon,” which I’d heard (more or less) as live performance recordings on YouTube. Right off the bat, I can say those two songs did not disappoint.  “Evening Sun” has a driving rhythm and bittersweet melody – the lyrics are a puzzle but it’s apparently about someone who can’t sleep, either literally or figuratively.  “Surgeon” is a quirky, catchy tune and to my interpretation, a bit of a nonsense or absurdist song.

Some of the songs are quite hard to understand, so you’re left in an awkward position of not really knowing what they’re about.  Others are more easily identified as love or breakup songs, like the cute “Monkey” and gloomy “Hello.”

I was surprised to hear a random crude word in “Be Something.”  It just seemed anomalous compared to their other lyrics and unnecessary.

On a different note, “One Hundred Shadows” was a complete surprise.  It’s a moody, haunting melody with dark imagery reminiscent of Dante’s Inferno:

I tunneled to the centre of the earth
To escape the troubled surface world
What did I find
What did I learn
The stars in the sky, they began to turn

The gist of the song is that he tries to escape chaos, and doesn’t find any help.  Or, maybe it’s that he realizes he looked for help in the wrong place.  I would really be interested to know the full meaning behind it.

Another one I enjoy more than I expected is the first song, “Sunbeam.”  It’s quite philosophic as well:

Science City isn’t Ocean 2.0, and I think as a fan, that is kind of disappointing when you’ve waited two years for more of the same.  On the other hand, Parekh & Singh are evolving as musicians, and like all other musicians, their lives and experiences factor into their music.  (Singh’s mother, Jayashree Singh, passed away in 2018, which could be why some of the new songs are sadder lyrically.)  I still appreciate the new music, and, as always, their aesthetics are amazing.  I’ll leave you with the music video for “Hello”: