Man’s Search for Meaning by Viktor Frankl is part memoir, part manifesto tackling the existential question of human life and why it matters. The message resonates with Frankl’s Yes to Life, but this longer work expands on his points with heartrending examples from his experiences in concentration camps. Though the main focus is valuing one’s own life, the book also challenges us to value other people’s lives, including those of our enemies.

Thank you to everyone for your kind wishes on my last post and other platforms. It’s truly encouraging. 💛

Resurfacing for a moment, I have some quotes to share from the newly published Yes to Life: In Spite of Everything. It’s the first English translation of some lectures by Viktor Frankl, psychiatrist and Holocaust survivor, most known for his book Man’s Search for Meaning.

Later I’d like to film a video with my comments, but for now, here are some things he said that—at the risk of waxing dramatic—I’m turning over in my very soul. Some are things that resonate with me immediately, others are profound question marks that nag and challenge. For context: Frankl was writing this in the mid-1940s, while trying to return to “normal” life in the aftermath of unimaginable pain and loss of his loved ones. 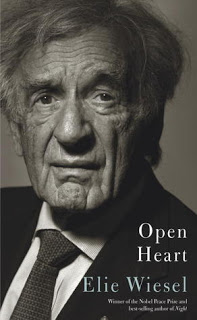 In his memoir Open Heart, Elie Wiesel takes us through his experiences surrounding his 2011 open heart surgery.  Wiesel is famous for his Night trilogy, and here some of the same themes come back in short, fleeting chapters – the dark memories of life in Auschwitz and Buchenwald, as well as the perennial question: why does God allow His children to suffer evil?  What should a Jewish person’s response be in times of persecution or pain?  Question marks abound in this short work, underlining the great despair we may sometimes feel when evil touches our lives.

One reason I picked up this book was to understand something of what a patient experiences during this medical procedure.  My grandma has faced a myriad of health issues, including two heart surgeries; she endured them with grace even while she was in terrible pain.  What could she have been feeling?  I have never asked her, choosing instead (as with other personal questions) to seek another avenue of understanding in Wiesel’s book.

Of course, it is not an exact parallel.  For one thing, Wiesel’s perceptions or imaginings of the afterlife are not identical to Christian beliefs on the same.  He describes his picture of hell as “ruled by cruel, pitiless angels” and full of physical tortures.  In this book, he does not seek to systematically explain his beliefs, offer a treatise on death, or even describe the surgery in detail.  Instead, Wiesel presents his thoughts and reactions moving from one scene to the next – a surreal, metaphysical, and ultimately personal exploration.

I’ve mentioned before Shūsaku Endō’s book The Silence, one I’ve been actively avoiding (yet will ultimately read).  In Open Heart, Wiesel touches on the same theme – the apparent silence of God.

…Auschwitz is not only a human tragedy but also – and most of all – a theological scandal.  For me, it is as impossible to accept Auschwitz with God as without God.  But then how is one to understand His silence?

For Christians, too, this question is not irrelevant.  Many of my family members in Christ are enduring persecution as I write.  Barnabas Aid is a charity I support, and every day their prayer focus features a story of the horrifying, often government-sanctioned brutalization of Christians in other parts of the world.  The Armenian Genocide – which Wiesel worked to bring awareness to – is a historic example. On a personal level, each of us has suffered his or her own tragedy, be it a physical disease, a mental health struggle, the death or loss of a loved one, or something else which we may never tell another human being.

Wiesel’s answer, in part, is as simple as the question: “Since God is, He is to be found in the questions as well as in the answers.”  There is certainly wisdom in acknowledging mystery.  Humanity itself involves mystery, from questions such as the Creation of the world and the beginning of a human’s soul, to those about the origin of evil and enduring hatred.

To add to this, it is no coincidence much of the New Testament covers the existence of persecution.  I’ve personally found comfort in the Gospel of John, where Jesus speaks to His disciples directly on this subject, with empathy:

I wish there were words to adequately describe John 17 – epic or poetic seem trite.  But here, too, in His last prayers before death, Jesus speaks of His followers:

I do not pray for these alone, but also for those who will believe in Me through their word; that they all may be one, as You, Father, are in Me, and I in You; that they also may be one in Us, that the world may believe that You sent Me. And the glory which You gave Me I have given them, that they may be one just as We are one: I in them, and You in Me; that they may be made perfect in one, and that the world may know that You have sent Me, and have loved them as You have loved Me.  (John 17:20–23, NKJV)

Suffering remains something of a mystery to me.  Through my own experiences, though – which, while personally crushing, were minute compared to those of others – I can affirm God was never absent.  If even small struggles matter to Him, how much more so the greater ones.