And of that second kingdom will I sing
Wherein the human spirit doth purge itself,
And to ascend to heaven becometh worthy

After enduring the nine circles of Hell, Dante and Virgil finally make it out of the underworld and back to the surface of the earth.  Under a starlit sky, they watch as a boat filled with souls and captained by an angel approaches the foot of Mount Purgatory.  Dante continues on his own journey as he follows Virgil up the nine levels of the mountain.  Together, in a similar vein to their experiences in Inferno, the two travelers observe the different disciplines which souls must endure before they have been “purified” of their remaining sins and made fit to enter Paradiso.

Some readers find the second two books of The Divine Comedy to be less interesting than the first.  I actually found Purgatorio to be much more compelling than Inferno, despite my expectations and the fact I don’t personally believe in the doctrine of purgatory. I think this must be for three reasons:

As before, Dante meets a number of real-life individuals on the mountain, while commenting upon contemporary issues in Italy.  He himself goes through purification of the seven “Ps” (peccatum = sin) as he moves from level to level.  Finally, leaving Purgatorio behind, he comes out again into the open air and finds the woman he loves – Beatrice – in a beautiful forest. 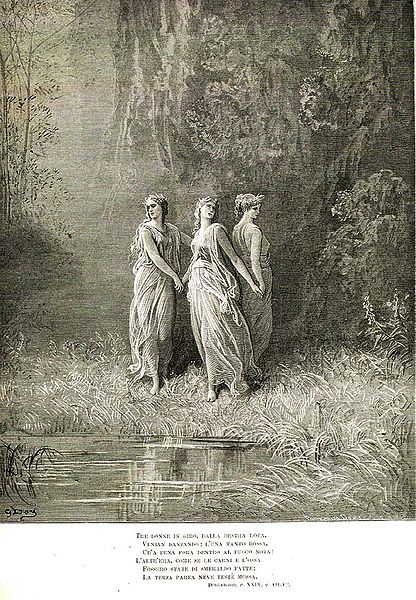 After Purgatorio, which was almost enthralling, Paradiso was a great disappointment.

Virgil, one of the condemned spirits, had to leave Dante at the end of Purgatorio, as I somewhat anticipated.  Now with his beloved Beatrice as his guide, the young poet completes his journey by ascending the nine levels of Heaven.  Along the way, he meets Biblical and Christian figures such as Solomon, St. Peter, St. Thomas Aquinas, and the Venerable Bede.  The higher he climbs, the more intense become the light and worship, culminating in the dazzling pinnacle of Paradiso, where God is exalted above all.

I’m afraid Dante’s imagining of Heaven is, well, boring.  Unlike the other two places of existence, there is little scenic variety here, and the illustrator, Doré, seems to have been of the same impression – there are far fewer illustrations in this book than in the other two.  Also, Dante makes what I think is a huge writer’s mistake in inserting his real-life love interest as one of the main characters, then proceeding to portray himself as staring at her adoringly through much of the story, while she grows more and more beautiful.  It’s hard to take it seriously.

This may be philistine of me, but I honestly think The Divine Comedy is somewhat overrated.  As a work of the early 14th century, it is indisputably impressive, and I sympathize with the author to the extent that he wrote this while banished from his homeland.  But with the insertion of personal life, the commentary on Italian affairs and figures, as well as some questionable theology, there was much I could not relate to.  For me personally, The Pilgrim’s Progress is a stronger allegory of faith, not to mention more enjoyable.

Dante, lost in a dark forest, is overcome by feelings of fear and loneliness, until he is met by the spirit of Virgil, the Roman poet and author of the Aeneid.  Virgil was sent by Beatrice, Dante’s deceased childhood sweetheart, to come to his aid and help him back into the way of light and salvation.  The way back, however, starts as a downward descent into and through the nine circles of Inferno.  The journey becomes a test to Dante’s courage as he, led on by Virgil, faces the cries, tortures, and apparitions of sufferers in Hell, some of whom he recognizes.

As I write this, Christmas is just four days away, which may be why I could not help thinking of A Christmas Carol when I read this: Virgil as a more kindly Ghost of Christmas Yet to Come, and Dante as a melancholy Scrooge.  However, Tolkien also came to mind, for Inferno is as terrifying a landscape as Mordor (perhaps moreso), filled with graphic portrayals of misery and torment.  Virgil then leads as a stern elf or wizard, and Dante is our hobbit.  The half-dead prisoners of Inferno are like so many Gollums – half-despicable, half-pitiable in their anguish and hatred. 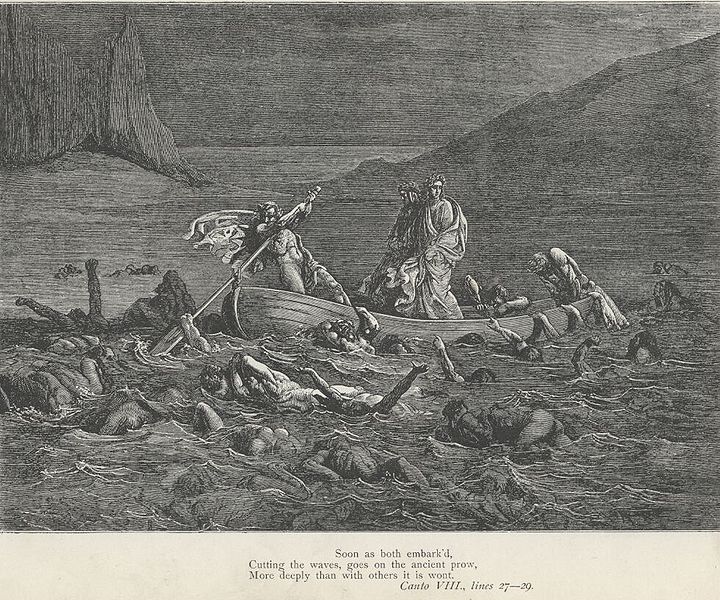 There are many, many references to contemporary and historical figures in this story, and most of them are Italian.  I chose not to read an annotated edition (feeling I would never make it through) but instead looked up names along the way when the context was insufficient.  The edition I read was the Henry Longfellow translation, with summaries of each canto by Anna Amari-Parker.  Apart from one or two confusing ones, I felt the summaries greatly helped my understanding of the text.

To be perfectly honest, I was underwhelmed by the story itself.  While initially the trek through monsters and chasms draws you in, it seemed to grow quickly repetitive.  As he descends from circle to circle, Dante finds different groups of people being tortured in different ways; he frequently stops to talk to people he recognizes and is chastised by Virgil if he lingers too long.  Virgil, elf-like, saves him from any real danger by finding “the way out” or by flight if necessary.  And so it goes on, till they reach the last scene of despair. 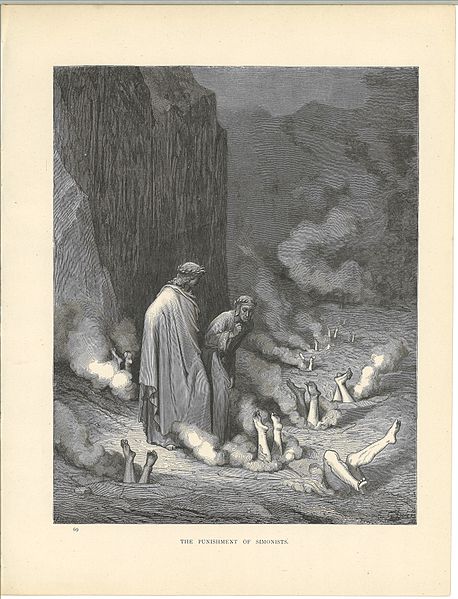 What really made the book stand out to me were the illustrations by Gustave Doré.  In total, he created 135 wood-engraved illustrations for The Divine Comedy, which, in Inferno, average to 2-3 full illustrations per canto!  Keep in mind, Inferno contains mostly pictures of the cloaked Virgil and Dante staring at crowds of writhing, very nude figures, not a pleasant subject.  In context, however, it’s effective as an almost graphic-novel style of storytelling.  Doré also excels at atmospheric landscape and lighting, making you sometimes forget you’re looking at a wood engraving.  Not gonna lie, I preferred the illustrations over the writing.

This one is my favorite, which I used before in my review of The Brothers Karamazov.  These are the traitors trapped in ice, and you can hardly believe what skill it takes to portray ice in wood, yet he does, brilliantly: 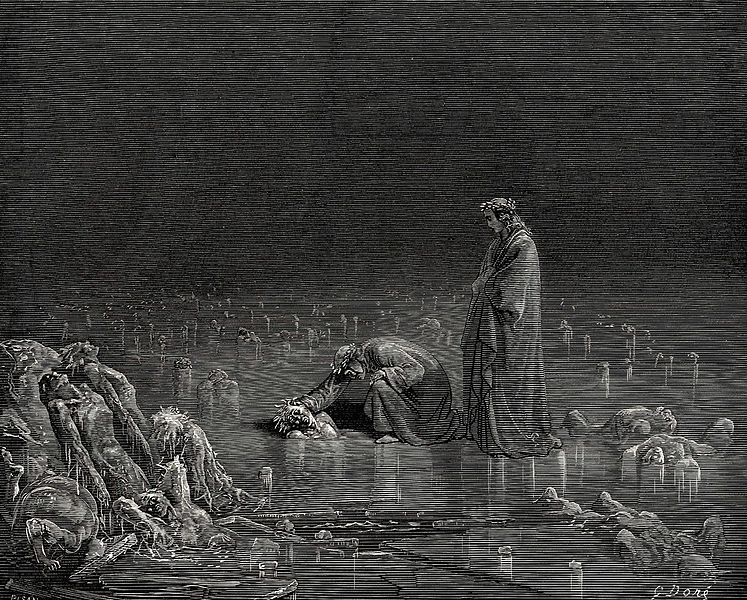 Being as enamored of wood engravings as I am, I did some searching to see how it’s actually done.  I found a demo by an artist named Anne Desmet, from the Royal Academy of Arts:

After patiently saving vacation days, today I can at last disconnect from work emails and other stressors.  I really want to slow down even more over my almost two-week holiday, beginning with these last few days of Advent.

One of my favorite family traditions is putting up a tree with my brother and sister.  My grandparents gave it to me years ago, and over time the three of us have gathered a collection of mostly red and gold ornaments for it.  Some are old pieces from our family, and others we purchased ourselves, many from Hobby Lobby.  The tree topper is new this year and being from Dollar Tree was incredibly affordable!

I have a little white tree I decorate as well (not quite so elaborately).  This is probably its last year, as it is turning yellow.

As you might imagine, it’s this time of year I like to get a lot of reading and studying in, as well as planning for next year’s reading.

I’m still perusing the archives of The Word on Fire Show, the Catholic podcast I mentioned a couple of weeks ago, and today I listened to an excellent episode about Dante’s Divine Comedy.  I’ve been “unreading” this book for a year or two, finding it difficult to get past the first cantos.  Bp. Barron gives an intriguing overview of the entire story and symbolism, and now I’m itching to give it another try.

I have the Longfellow translation, with illustrations by Gustave Doré.  Doré’s style can well be summed up as “dramatic,” which is one of the reasons I chose this edition.  And, you know how I LOVE those woodcarvings…

I’m debating whether to participate in any reading challenges next year.  These are the ones which entice me:

The other thing I’m trying to figure out is whether I’ll have the time and energy to podcast next year.  It remains to be decided…