Hi readers – hope everyone is doing well!  I’ve been incredibly busy the last several weeks at work, which seems to be the new normal.  To be honest, I haven’t been reading much, but I have watched some interesting films lately which I wanted to share.

The Acts of the Apostles
Rereading Acts, one thing which stands out to me is Peter’s character arc.  He starts out as emotional and at times cowardly in the Gospels, then grows in faith and courage till he faces his fears in Acts.  It’s really moving to see him develop in this way; it’s the progress every Christian wants to make. 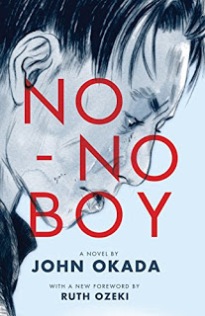 No-No Boy, by John Okada
This 1957 novel is about a “no-no boy”: a Japanese-American man who, under pressure from his mother, refused to fight in WWII against the Japanese and was subsequently imprisoned.  I actually live near a temporary camp where Japanese-Americans were held, and as disturbing as it is, I feel it’s important to read about this piece of local history.  It’s the only remotely contemporary novel about this topic that I’m aware of, and interestingly, it was Okada’s only book.  So far it’s very interesting, but a slow read for me (hard to get through the cussing and domestic violence…getting major Brothers Karamazov vibes).

A small local theater was playing Peter Jackson’s new documentary, a colorized edit of WWI footage narrated by veterans.  I thought it was a great film, both emotionally evocative and also highly educational.  If you get a chance to see it in theater or on DVD, I’d highly recommend it!

This is one I saw on DVD with my mom and brother.  Leave No Trace is an indie film about a father and his daughter who live off-the-grid in the woods, until they are found and forced to leave.  Their love for each other is put to the test when a social worker tries to get them to rejoin society.

This is a very slow-paced film and stylistically very “indie,” from the woodsy shots to the folk music.  I think it could have been 30 minutes shorter, and I wasn’t sure if the ending was actually realistic (plus it was really depressing).  That said, overall it was a fascinating film and an important conversation piece, especially if you live in the Pacific Northwest where we have a homelessness crisis.

A Sister’s Call (2018)
This is a documentary about a sister who spent years looking for her homeless brother, Call, and finally found him.  The film covers topics such as schizophrenia and sexual abuse, so be warned, it is pretty dark.  I found it hard to watch but it was certainly thought provoking.

I just finished listening to “TL;DR,” an episode of IRL (“In Real Life,” a Mozilla podcast) that Mozilla (who else?!) recommended to me. The host and the interviewees talk about how people today have trouble reading books because we are so used to digital mediums and the brevity of headlines.  It was a rather cursory treatment of the topic – and felt a bit like an extended ad for Mozilla’s “Pocket” app – but it is a topic that interests me.

I know I read differently now than I did as a kid, and ironically I have a much lower attention span as a 20-something than as a ten-year-old.  I would be curious to know if it’s reversible damage, or if my brain is now permanently wired this way…

My sister shared this with me – a new documentary called They Shall Not Grow Old by Peter Jackson (director of The Lord of the Rings).  He took film footage from WWI, restored and colorized it, and added voiceover so you can get a sense of what it was really like.  Hoping this makes it to the U.S.!